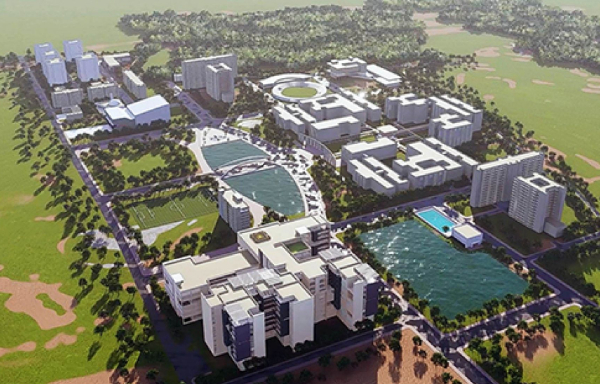 University of Rajshahi is also known as Rajshahi University, which was established on July 6, 1953. The University is the second-largest University located in Rajshahi, Bangladesh. Rajshahi city is situated in the northwestern part of Bangladesh in the green premises of Motihar which is close to Padma river.

Since it’s foundation, University of Rajshahi has a glorious history of 68 years in making higher education and research available for many students.

The University of Rajshahi has 59 departments that provide a low fee structure along with modern educational equipment and a large number of seats to worldwide students to pursue MBBS careers.

The necessity of a University in the Northern part of ers while East Pakistan was felt immediately after the creation of Pakistan. These areas were comparatively lagging behind in higher education and the University of Dhaka then only of its kind in the country, being situated in the capital was not very easily accessible to the students of this part. Following a popular demand for a University in this region, the government prepared a feasibility report and Rajshahi was found suitable for establishing the same. Rajshahi University act 1953 (East Bengal Act XV of 1953) was passed by the East Pakistan provincial assembly on March 31, 1953. The assent of the then Governor to establish a University at Rajshahi was first published in the Dhaka Gazette. Extraordinary dated 16th June 1951 and consequently the University started functioning. â€œBara Kuthiâ€, 18th centuryâ€™s Dutch trading house was made the administration building. Dr. Itrat Hossain Zeberi was the first Vice-Chancellor of the University. Its normal academic activities began in 1954. During the early days of inception classes were held at Rajshahi Government College. In 1961 the University moved to its present campus.

The University of Rajshahi is situated around the best sites of Bangladesh and many of the tourists daily explore the Rajshahi city, A metropolitan city located on the north bank of the Padma river. Rajshahi city is well known for its education, culture, administration and business centres. It’s the historic centre of silk production and the home for many renowned educational institutions of Bangladesh.

Rajshahi city is also known as the “green city” as it’s located in the green premises and the environment of that place is very refreshing.

The university’s main campus is in Motihar, on the eastern side of the city of Rajshahi and a mile from the Bangladeshi coast of the river Padma.The campus area is nearly 305 ha (753 acres). Access to the walled-off campus is controlled through three security gates. It houses eleven large academic buildings — five for the arts, business studies and social sciences, four for the natural and applied sciences and two for agricultural studies.

Most of Rajshahi University’s funding comes from the government. The Bangladesh University Grants Commission is the body responsible for allocating funds to all public universities.

Students are admitted after they pass the Higher Secondary Exam (HSC exam). In earlier days students partook in entrance examinations, a separate one for each department. This has been a contentious issue, as there used to be only one exam for each faculty, after which students would be allocated to departments according to their result and choice of program.

The tuition fees are relatively low; nevertheless, a hike in admission fees, during the 2006–07 session, drew criticism from student bodies.In 2007, the university awarded a total of 340 scholarships, whose annual value is around 1.1 million taka. In addition, there are merit awards given by residential halls, departments and the university itself. Students are eligible for the Prime Minister’s Gold Medal award.

All colleges of the northern and southern regions of the country used to be affiliated with University of Rajshahi. However, the administration of colleges across the country was taken over by the National University when it was established in 1992.

Mission is to produce scientifically trained, socially responsible, compassionate doctors and instill in them a spirit of inquiry and learning, to contribute to the body of knowledge in medicine and allied fields in a meaningful manner, and to help serve the immediate and long term medical and social needs of our society.

Why Study MBBS at University of Rajshahi?

Students have to set in the following eligibility criteria to get admission to the University of Rajshahi to pursue MBBS:

Students need to have the following documents for the admission process: